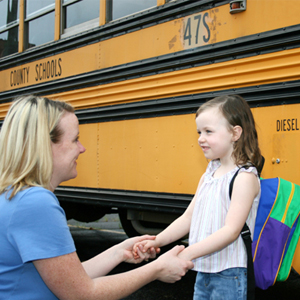 For many months now, cell phones have had the capability to be tracked by a GPS chip implanted in the phone in case of emergencies so emergency help can be summoned even if someone is unable to pass information on their location.

As the time passes on, GPS trackers are becoming more integrated into our lives. GPS tracking and reporting technology is integrated to every device from smartphones to dog collars to watches to sneakers. As this emerging technology goes mainstream, parents are starting to reap the benefits.

Safety & security of kids is the primary responsibility & concern of all school authorities; it only seems sensible to have GPS trackers installed in school buses for assuring the safety of kids & drivers. Parents would also find it real handy if they could get notifications as text messages on their mobile when their children are approaching the bus stop; say for instance, when the school bus reaches a certain distance from the child’s drop off point or two stops before. Later on, parents can be notified again that child has reached & been dropped off at the usual drop point.

A School bus GPS tracking alert system sends out data packets to show the current location of the school bus and would have many benefits besides the most obvious is in case of emergencies. Parents, children, school authorities and the bus drivers would all benefit from this system being in place.

Children will enjoy this system because they will be clearly alerted when it is their drop off point so they can read books or chat with friends without having to worry about keeping an eye out for their stop. In addition, by having the most efficient path mapped out to their drop off location, students will spend less time riding on the school bus.

On the other hand, parent can send an SMS or text message, to receive information including current location and the expected time of arrival at the drop off point. This feature would allow the parent to constantly monitor the status of their child’s bus so the child won’t be left unattended at the bus stop and so the parent can know how soon their child will be arriving.

How school authorities will benefit?

Not to mention about the significance of children’s safety till they reach home; with the help of these GPS trackers, school districts can monitor how the bus driver is performing with accurate alerts, charts & reports on speeding, dangerous sharp cornering, sudden breaking, jackrabbit starts etc so that these issues can be addressed with the drivers and ensure the children a safe bus ride.

This GPS program will also assist the school bus drivers in making their jobs easier since their path will be clearly shown to them. Bus drivers do not always drive the same routes. Neither are they familiar with the best route nor which stop each child is to be dropped off at. This would be a time-saver for the driver and help prevent any confusion by a child potentially getting dropped off at the wrong drop off point, leading to panic of parent when they arrive to pick up their child and they aren’t there.